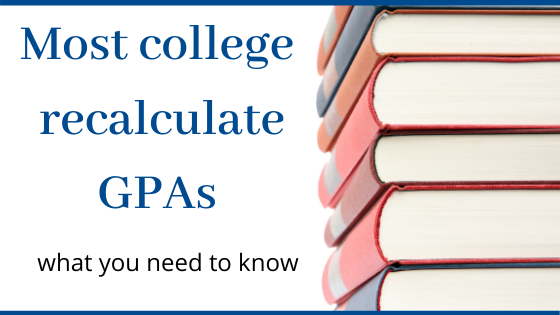 Most Colleges Recalculate GPA— what you need to know

There are a lot of rumors when it comes to college admission and GPA myths are pervasive. If you’ve heard other students or parents talking about ways you can boost your GPA and improve your chances for college admission, there are a few things you need to understand.

First, GPA, or grade point average, is a calculation of a student’s grades throughout high school (or college). It is a quick way to determine if a student typically earns A’s, B’s, C’s, etc.
In a basic calculation, each grade earns the following points:
So when someone says they have a 4.0 average, it is another way of saying they have earned all A’s.

What Are Colleges Looking For?

College admissions offices are looking for ways to compare students from different high schools and to convey to prospective applicants the type of students who tend to do well at a particular college.
If you learned that most of the students admitted to UC Berkeley had between a 3.89 and a 4.0, you would understand that to be a competitive applicant, a student should have a strong A average throughout high school.

So far we’ve kept the GPA calculation simple, but when you start examining how GPA is calculated at different high school across the country (and internationally), you will find significant variation.
How can you compare the following student GPA’s:
By looking at the numbers, we can’t tell who is the stronger student because the GPA’s are not calculated on the same scale. This is why many colleges will recalculate your GPA so they can fairly assess applicants using the same scale / standards.

Above, I outlined the typical 4.0 scale, but some schools and districts calculate GPA on a 5 or 6 point scale. My daughter’s high school used a 100 point scale.
When you are reading college admissions data, expect all GPA’s to be reported on a 4.0 scale.

A weighted average means certain classes have been awarded more points than others. Typically advanced course work will receive additional points. You might see weighted courses earn the following points:
Earning A’s in these weighted classes is how a student could graduate with a 4.3 GPA out of a 4.0.
But not all high schools use the same methods or weight the same classes. This presents a challenge for colleges trying to use GPA to fairly compare applicants.
Let’s reexamine the example numbers presented above:
In this scenario, we might rank the 3.95 and the 5.2 in the top and the 4.0 and 111 behind the other two. You couldn’t know that by simply looking at the GPA; you need to look more closely at each student’s transcript. This dilemma is a great example of why colleges choose to recalculate GPA’s.
Typically, you will find colleges utilizing a student’s unweighted GPA, the average where all classes earn the same points, regardless of whether they were honors, AP, IB, etc. Yes, colleges will pay attention to who took more rigorous classes, but they may not calculate that into a student’s GPA.

How does this affect us?

If you follow my general advice of taking challenging classes that are right for you and making the best grades possible, this information doesn’t affect your four-year plan.
But if you’ve been hearing rumors about taking certain classes because you earn a weighted average or GPA multiplier or if you think all A’s in easy classes will help you beat the system, you might want to reexamine your academic plans.
Here are some guidelines:
Take appropriately challenging courses.
If honors, AP, or IB options are available AND if you are able to work at a more challenging level, take the harder course.
Not all students can take a full-load of advanced level courses. That’s okay. Take the harder course(s) where appropriate.
Understand that honors B’s are still B’s
I’ve met a lot of high school students who thought that because their honors B would average into their high school GPA as an A (4 points instead of 3) that it was the same as an A. It is not. B’s in honors / advanced courses are still B’s. They appear as B’s on your transcript and if colleges calculate your unweighted GPA, they will be counted as B’s.
Earn the best grades possible.
When I meet with students and parents in consultations, I ask, “Would 15 minutes of extra studying in that class make a difference in your average?” In other words, could a student move from a C to a B or a B to an A with a little extra time and effort? If yes, get to work.
Sometimes the answer is no. Even if it was possible to find an extra four hours a day, it might not be possible for that student to earn a higher grade in a particular course. I don’t want students to lose sleep or become anxious about grades if they are already doing everything they reasonably can.
So work to earn the best grades with hard, but reasonable, effort.
Remember core academic courses come first.
Math, English, science, social studies, and languages other than English form the backbone of any four-year academic plan. Other interests, even if they are academic in nature, come second. This means you shouldn’t replace a fourth year class in one of the core areas with an elective.
All A’s in easy classes will not serve you well.
Yes, all A’s in easy classes may earn you an unweighted 4.0 GPA, but it may not help with admission. Selective colleges and universities are looking at a students grades AND the classes he or she has taken. If challenging courses were available, the student’s transcript will be reviewed in light of what he or she could have done. So a student who had the option to take advanced classes, but chose not to will be seen as lacking academic rigor. It makes sense; if James chooses not to take advanced classes, why would he be best prepared for the academic challenges at a selective university?!
Additionally, easier class schedules will not adequately prepare students for college. Last week I met with a junior who I had previously tutored for the ACT. She knew I would give her an honest evaluation of her senior year course selection (and she should have anticipated the “bad” news.) I told her that she HAD to take another year of math. This meant she wouldn’t be able to leave campus quite as early next year, but as a prospective business major she would be far better prepared so succeed in college with the extra year of high school math.
Avoiding tough classes may seem like a good way to boost one’s GPA, but it can leave students ill prepared for the academic challenges of college AND it can raise a red flag when admissions officers review transcripts.
Advanced courses do not mitigate low grades.
Ideally students taking advanced courses (honors, AP, IB, etc.) should be earning A’s and B’s. I understand that the occasional C might result from a course that became progressively harder after the withdrawal date or for a student who had a disappointing grade on his or her final exam.
In general, we don’t want to see students consistently making C’s and D’s in challenging classes. These grades are an indication that the student has gotten into a class that moves too quickly or is just beyond what they are currently able to manage academically. The fact that this course might come with an added grade point or GPA multiplier, does not disguise the fact that the student has a lower grade on his or her transcript.

Understand that colleges go beyond GPA when making college admissions decisions*. (*Unless you meet standards for automatic admission based on rank, GPA, and scores– typically only offered at some state universities.)
Colleges will look at an applicant’s grades AND classes. In many cases colleges will recalculate a student’s GPA to a unweighted 4.0 scale.
Continue taking challenging classes that are right for you and making the best grades possible.
]]>