College Applications: Early is Good, But Good is Better 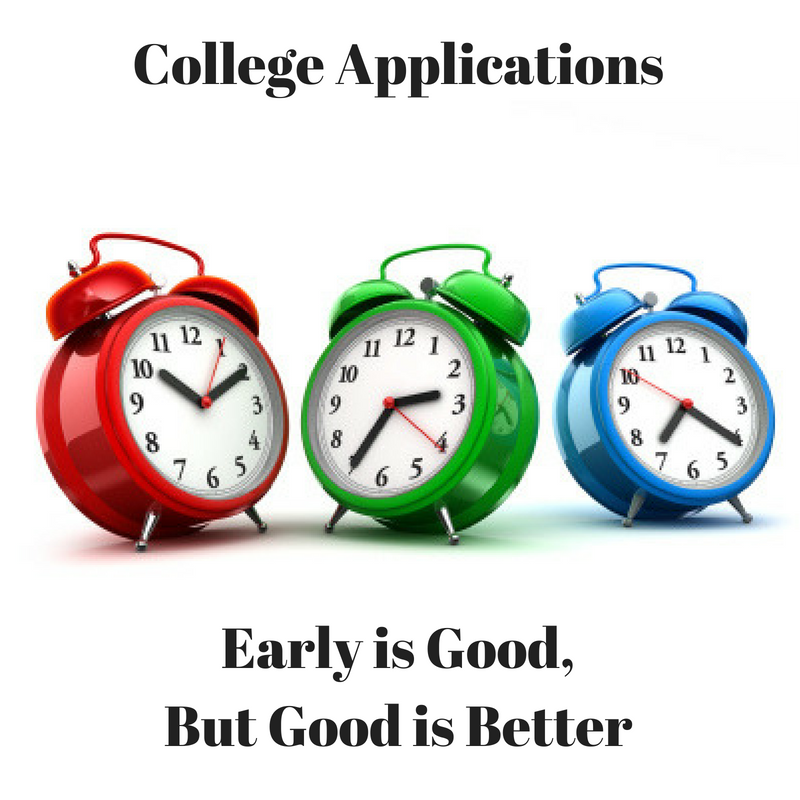 It’s August 2nd and if you have a rising senior in your house, you’ve probably received a few dozen emails reminding you that most college applications opened yesterday. And for a lot of students and parents, the stress of college admissions cranks up because it seems like everyone else is ahead of you in this process.

First, don’t panic. You are NOT missing out or messing up if your kid hasn’t submitted applications yet.

Second, it is important to remember that college applications are one of those situations where you truly get only one chance to make a good impression, so it is better to take your time and get it done right.

As we head into the school year, lots of families want to get applications done and out of the way. I’m a fan of finishing applications sooner rather than later, but I also know a well put together application is key. Let’s break down a few of the issues around applying early:

A lot of unnecessary stress is generated because the term “early” is misunderstood or used to mean multiple things.

The first and most identifiable definition of early applies to specific admissions policies: Early Decision, Early Action, etc. There are many early options and you are likely to see them listed with abbreviations like ED, EA, and REA. You will know this is something that applies to you because somewhere on the college application, you have to check the box for the decision plan that indicates you want to be considered early.

Sounds great, right? There can be some drawbacks to applying under these plans. The most obvious comes with Early Decision (ED) where students are limited to applying ED to a single school and when they do so, they commit to attending if admitted. So if Rice admits me under Early Decision, I’m going to Rice and I need to withdraw all my regular applications for other colleges. This makes it harder for me to compare scholarship offers because I’m essentially committing to Rice. (More information about the pros and cons of these options here and here.)

The next type of early admission doesn’t refer to any specific admission program. It is simply the practice of submitting a completed application sooner rather than later. If you want to apply to the University of Oklahoma, the application deadline is February 1. OU does not offer any early admission options. However, OU does encourage students to apply by December 15 in order to be considered for scholarships. So if you submit your application to OU on October 15, you are ahead of the deadline and might consider yourself early.

Just to complicate things, some universities seem to have options that are somewhere in between.

Texas A&M University does not have ED or EA programs for general admission, but students interested in applying to the College of Engineering will find an Early Action deadline of October 15. These engineering students will be notified by mid-December.

Take time to check what official options are available at the universities on your list and make sure you understand all the requirements and restrictions if you apply under an ED, EA, or REA plan.

There are some advantages to applying early or you wouldn’t hear so many people talking about it.

Obviously if you can receive a definitive answer early, particularly from a hard-to-get-into school, it makes the admission process less stressful. But applying early might also give you additional advantages.

Colleges want to admit applicants who will enroll as students. Think of this like asking someone for a date. You want the person you decide to ask to say yes. Colleges want admitted students to say yes to the offer of admission. Students who apply Early Decision are committed “yes applicants”; colleges can count on them to enroll.

When you look at the admit rate for Early Decision versus Regular Decision, you will typically find schools admit a higher percentage of early applicants. Yes, there is a little bit of the “want you to want me” factor, but it is more complicated than that. Think about who would apply early. The students who can meet an October 15 or November 1 deadline are the ones who have it together: SAT / ACT taken, schools researched, essays written, letters of recommendation secured, etc. In other words, often the early applicants are the go-getters who are already at the top of their classes.

Beyond Early Decision plans, what most universities do (including UT and A&M) can be described as rolling notification. This means that students are notified as soon as the university is ready to make a decision. So the highly qualified student who submits an application on August 19, might receive a letter of acceptance in September. Similarly, the completely unqualified student who applied at the same time might receive an early letter of rejection because his grades and scores are so far beneath the university’s standards, that even additional consideration won’t change the decision. (Applying early cannot erase low grades, scores, class rank, etc.)

In some cases applying early makes a difference. As colleges approach admissions deadline they have fewer spaces left to offer applicants and it may become more competitive to secure acceptance. But don’t let that idea cause you to panic. Colleges have been making these decisions for years and are generally consistent in applying their standards. The students who are likely to notice any difference are those who are “on the bubble”: they could be admitted or rejected. Highly qualified applicants won’t be rejected because they applied in November instead of September and unqualified applicants won’t be admitted just because they applied the day the application opened.

The more selective schools can’t make rolling decisions because they don’t know how competitive the applicant pool is until everything has been submitted. If you are applying to some of these more challenging schools, don’t be alarmed when you see friends getting early letters of admission and you are waiting until March to hear results.

When Is An Application No Longer Early?

But if you are trying to show interest in a school with rolling admission, there isn’t an exact answer. In those cases, applications that are sent right before the deadline can’t be considered early. Your midnight submission on November 30th isn’t early for a December 1 deadline. Early can become a relative term in these situations.

This is where I see families getting stressed out. In fact, I’ve spoken to a handful of clients in the last week assuring them that they aren’t late if applications aren’t sent on August 1. Here’s my general policy:

Here’s my nightmare every August. Students and parents have been whipped into a frenzy because the Texas A&M application now opens on July 1 and neighbors are talking. Everyone starts feeling the pressure because they worry they are behind everyone else. Social media exacerbates this as post of college acceptance start showing up (even in July!). Parents and/or students hit the panic button and I get a call for help.

(Here’s the real nightmare part.) Often I can’t consult with someone that day and end up scheduling a meeting a week or two out. Then I get a call or email the night before our scheduled meeting that says, “Thanks, but never mind. Pat finished the application and sent it last week.” In other words, the pressure to apply early got too great and the student or family rushed the process.

If you only get one opportunity to present your case for admission, take your time and get it right. Don’t let the desire to be done keep you from doing a thorough job. Early is good, but a quality application is better.

There are some situations in which a rushed job won’t matter: if you already meet the criteria for automatic admission and simply need to submit a completed application. But I work with a lot of clients who desire scholarships or are applying to schools or programs where every part of the application will be examined. Unless you are an obvious slam-dunk for admission, take your time and get it right.

In most cases an extra week or two is all that is needed to polish essays, review responses for errors, and pull together all the details.

Best wishes to all seniors and their families. I know this is a stressful time because my own daughter is applying to college this fall. Now I get to experience all of these issues from the parent’s perspective.