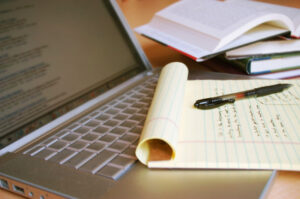 I remember my 7th grade math teacher, Mr. Henson, joking that he would grade our papers by throwing them down the stairwell outside his classroom.  The heavier papers, the longer ones and papers with the fancy report covers, would fall further and receive better grades.  I was shocked that he would say this.  How could Mr. Henson ignore substance and judge on superficial factors?  He didn’t actually grade that way (and I did receive an A for my paper, “Math in the Grocery Store.”) Many people wonder if SAT essays might be graded “Mr. Henson style”, judging more on looks and length than substance.  I’ve seen a number of recent media stories sensationalizing correlations between essay length and high scores. Parents are usually the ones who question the grading of SAT essays.  How can thousands of SAT essays be graded fairly?  How can the scores represent something more than one person’s opinion?  Is the SAT Writing an objective or subjective measure of a student’s work? I speak from experience when I say the grading of SAT essays is highly structured, consistent, and a fair assessment of student writing.  I graded for the College Board in 2005, the first year the writing section was added to the SAT.  I was working full time for the Houston school district and thought grading SAT essays would be an interesting experience and a good part-time job.  It was interesting… Before I could qualify to grade, I had to successfully complete about 40 hours of training where I studied the grading rubric and learned what to evaluate and what to ignore.  I learned that handwriting, personal opinion, and accuracy of facts play no part in an essay’s score.  The scoring considers “what” and “how” students write. If you’ve never graded or had your work scored using a serious rubric or score-guide specifying the standards of each level, you may think grading involves a lot of personal opinion; it does not.  The SAT scoring rubric outlines the expectations for five elements.  Each level, from the lowest score of a one to the highest of a six, is clearly defined.  In training, I was taught what to look for on each component. And then there were the tests.  In order to successfully complete training, I had to pass a series of tests to make sure I was able to accurately score essays.  Passing the training tests was more stressful for me than taking the actual SAT. Once I had passed and was qualified to score, the testing continued.  In order to log-on to the online scoring site each day, I had to pass a mini-quiz.  I was given a set of pre-graded essays to score; if my scores were wrong, I couldn’t access the system to grade.  Once into the system, I had to make sure to keep up my pace and accuracy or the indicator lights on my screen would turn color.  Grading essays too fast to too slow would affect the clock indicator.  As I graded essays, pre-scored papers would be included and if I scored them incorrectly, my accuracy rating would drop.  Problems with speed or accuracy were reasons to be dismissed from scoring. I found grading to be both boring and stressful.  In a ten-day window following the SAT, I would read hundreds of essays that all began to sound the same.  But, all the while I was stressed about my accuracy and pacing. Grading was an invaluable experience, but a horrible part-time job.  However, based on my experience, I can say with confidence that the grading of the SAT essays is fair and consistent.  (Anyone who doubts this can sign up to grade!) Next time I will discuss specifically what is graded on the SAT essay.]]>